Bitcoin was weaker on Monday as stock markets swooned on the latest surge in virus variant cases and inflation last week.

Bitcoin is lower by $1,000 on the day and is looking like a test of the $30,000 support level could happen again. If that level gives way then a swift move towards $20k is possible and options traders have been betting on that outcome.

The BTC options market saw increased demand for out-of-the-money put options at $22,000 and $20,000.  Yesterday saw a big order for 500 contracts of the $22,000 put option expiring on December 31st changing hands via the over-the-counter (OTC) desk Paradigm. 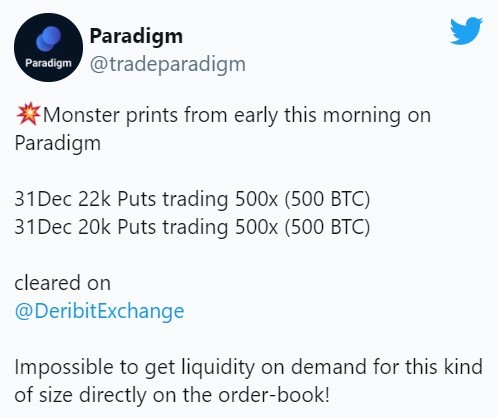 Despite the bearishness, there was further evidence of investment banks getting involved in BTC as Bank of America was reported to be offering BTC futures trading to certain clients.

The bank had previously kept its distance from the crypto market with its CEO Brian Moynihan saying as recently as May:

But he added, “We continue to evaluate the opportunities, risks and client demand for products and services related to cryptocurrency,”

The move follows news last month that Goldman Sachs would also provide access to BTC futures for its clients via the Galaxy Digital platform founded by Mike Novogratz.

All eyes will be on Bitcoin as it tests the key $30k support level which held the price up over the last two weeks.

Ripple’s XRP coin was the subject of another big token shift from wallet to exchange.

The popular crypto tracking bot Whale Alert tweeted the details of a transfer worth 84.3 million XRP. The transfer carried the XRP equivalent of $49.2 million.

Details show that the recent transaction was made via the Bybit trading platform. Unlike Binance in the US and other major crypto exchanges, Bybit did not suspend XRP trading this year after the SEC initiated a legal suit against Ripple Labs in late December 2020.

The SEC had previously attempted to block the dispositions, claiming that the San Francisco-based company doesn’t have the “exceptional circumstances” necessary to include the former director.

The SEC case had accused Ripple executives of selling XRP tokens as an unregistered security sale. However, in June of 2018, Hinman gave a speech where he said that Bitcoin is not a security and that “current offers and sales of Ether are not securities transactions.”

In its formal response to the SEC, Ripple references Hinman’s public statements.

In short, there was no fair notice to the market that transactions in XRP violated the law or that the SEC would later claim XRP itself to be an investment contract.

The situation was further clarified in June 2018, when the Director of Corporation Finance told virtual currency purchasers that the agency did not consider the virtual currencies Bitcoin or Ether to be securities and would ‘put aside the fundraising that accompanied the creation of Ether’ and look instead at the ‘present state of Ether’.”

The Alonzo White test net launched on the 15th of July as Cardano moved closer towards providing smart contracts on its platform. The recent upgrade allows around 500 users to test its smart contract features, which represents a significant scaling from the first test net.

Cardano saw its price holding up at the $1.00 level and Bitcoin’s woes are dragging the market lower, but according to analyst Benjamin Cowen, ADA is “holding up so well” due to the reduced sell pressure where users weren’t un-staking even when the price dropped.

I have said that ADA is my primary hedge against Ethereum, not that I think ADA is going to overtake it but that I sort of foresaw some of the issues occurring with the high gas fees in 2017 and knew that people would be looking for other solutions.

People are not unstaking their ADA, and instead are just continuing to either hold it or add to their stake, then it’s going to reduce the sell pressure.

It was also reported recently that Cardano was the most held coin on trading platform eToro for the second quarter. ADA currently trades at $1.12 and the $1.00 level has held the coin up since March of this year.

THORChain’s RUNE was the worst-performing coin of the week with a 40% loss. The move marks a sharp downfall from the May highs of $22, with the coin now trading at $3.70.

The bearishness for THORChain was based on the project losing $4.8 million from its liquidity pools in a hacker attack. The project is a decentralized finance (DeFi) token swap protocol based on the Cosmos blockchain.

During a live attack, the network has been halted. Approximately 4,000 ETH of value was extracted from the protocol. While the treasury has the funds to cover the stolen amount, we request the attacker get in contact with the team to discuss the return of funds and a bounty commensurate with the discovery.

The size of the loss was later downgraded to 2,500 ETH and was much lower than initial fears of 13,000 ETH.

RUNE is currently ranked at number 72 in the list of coins with a market cap of $870 million.