Today, July 2nd, the crypto exchange of Binance is celebrating its fourth anniversary of its successful Initial Coin Offering (ICO). This milestone was highlighted by the CEO of Binance, Changepeng Zhao, and shared through the following tweet.

It’s July 2nd. 4 years ago today, we finished the #BNB ICO. Here was that experience, written 4 years ago, uneditted.https://t.co/fuDLgJwBSY

Within the tweet is a link to his 2017 blog post on LinkedIn which he published immediately after the successful ICO.

In the elaborate blog post four years ago, CZ announced that the Binance ICO had raised roughly $15 million in cryptocurrency in 16 days. Furthermore, the ICO resulted in the project being supported by 20,000 seed users ‘who invested both monetarily and emotionally in Binance’.

When reflecting on the 2017 blog post, CZ summarized the following key points that have stood the test of time.

“An ICO is a valuable tool if you use it correctly.”

“We got lucky in a lot of places. We also stepped on a few mines, luckily nothing too major.”

In another elaborate Tweet, CZ revealed that the ticker for Binance Coin, BNB, was actually a modification to avoid a conflict with another project. He explained:

BNB was actually called BNC back then. We did a name change due to conflict with another coin. Almost forgot about this. I think BNB sound better. Unbiased opinion.

As CZ was sharing Binance’s milestone on Twitter, he was asked when BNB’s 16th coin burn will be. CZ went on to respond that the BNB coin burn is expected between July 15th and 18th as highlighted in the screenshot below. 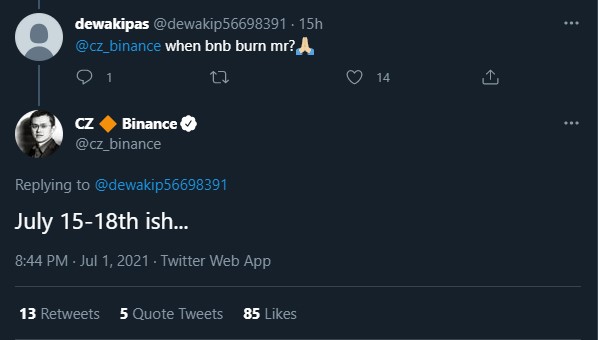 Money Flowing Out Of Crypto Funds Is 666M Less Than Previous Quarter Indicating Bearish Investors Are Already Out: Bloomberg

What is SWEAT? A New Move-to-Earn Token by Mobile Fitness App Sweatcoin

The SEC is bullying Kim Kardashian, and it could chill the influencer economy

5 Most Viewed Cryptos on CoinMarketCap – TAMA Lead the Chart