Chainlink oracles and price feeds were successfully integrated into 55 projects in the month of May. At the time of writing, Chainlink’s ground-breaking technology has been integrated into a total of 567 projects globally with the number growing on a daily basis.

Also in the month of May, Chainlink celebrated its two-year mainnet anniversary during which the project’s founder, Nazarov, thanked the community for its consistent and continuous support.

With respect to price action, the month of May was an eventful one for Chainlink.

To begin with, LINK set an all-time high of $53 on May 10th. However, this achievement was short-lived as the crypto markets were rocked by a selloff catalyzed by speculation of Tesla selling its Bitcoin holdings and China reiterating its 2018 ban on BTC mining and crypto trading.

Consequently, Chainlink started what would be a two-week pullback, worth 71.7%, that would see LINK hit a local low of $15 on the 23rd of May. The price of LINK soon rebounded to the $28 price level and is currently trading at $27.162 and slightly above the 200-day moving average. This important moving average can be seen (green) in the following daily LINK/USDT. 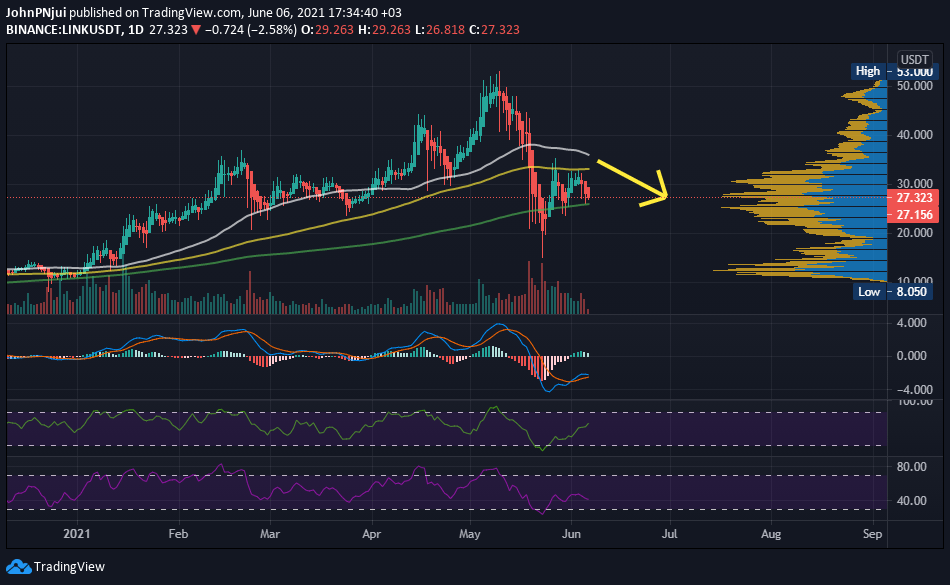 Also from the chart, it can be observed that the 50-day moving average (white) is on a path towards intersecting with the 200-day moving average in the next few weeks. Such an event would be the dreaded death cross that usually confirms a bear market for any asset.

In the case of Chainlink, several indicators point towards a possible retest of the $15 price area in the weeks to follow.

To begin with, and from the chart, the daily trade volume has been decreasing with the daily MACD highlighting a slowdown in buying of LINK. The MFI is also on a path towards entering overbought territory and the RSI confirms the reducing buying of Chainlink in the crypto markets.

In summary, Chainlink has a high probability of dropping back down to the ‘teen’ levels towards the end of June.

However, such an event can be negated by Bitcoin breaking past the $40k resistance and forging a path towards $50k. But Bitcoin is also facing a death cross of its own that would accelerate a drop by Chainlink in the second half of June.